Fraser Island was once a happy and healthy environment, the dingo shared his territory with visitors and residents and all benefited from this close and harmonious relationship. In 1992 the Island was World Heritage listed and the Qld. State Government took control, realising the money making potential, the tourist dollar took precedence over the protection of the Flora and Fauna. The dingo became a nuisance, and so the Fraser Island Dingo Management Strategy was formulated.

This strategy was the beginning of the end for the dingo..dumps, where the animals foraged, were closed, the Traditional owners, fishermen and residents were forbidden to feed the animals, native food became scarce, and when a young boy was tragically killed in 2001 by a starving dingo the government seized on the opportunity to eliminate the animals. Many animals were cruelly culled, aversive conditioning (hazing) was introduced, that is, shooting the animals with a clay pellet, which can cause broken bones or even death. Electrified grates and fences were built. Ear-tagging puppies was the next step, this caused infections and drooping ears.  Non-lethal poisoned baits were used to stop them from eating human food and shock collars were trialled.

Save Fraser Island Dingoes Inc. is a voluntary organisation founded in 2009 due to concerns raised by the community and visitors regarding the health and well-being of the Fraser Island dingoes.

SFID is a registered Not for Profit Environmental Organisation with Tax Deductible Status. The organisation monitors all activity on the Island that affects the sustainability of the Island dingoes.

Our mission is the conservation and protection of this unique and Iconic species.

The dingo population was on the verge of possible extinction, government legislation allowed animals to be trapped, tagged, hazed ( shot with clay pellets) and destroyed.  Apart from a few visitors and local residents, the public were generally unaware of the critical situation. SFID became the eyes and ears of the Island. reporting their findings to the media, the public, researchers and scientists.

SFID currently has over 300 members with a social media following of more than 3000 supporters. The fate of the Fraser Island dingo depends on public support, therefore community involvement is paramount. Visitors, employees and residents of the Island report their observations and SFID follow through at government level and media outlets. This ensures that any policy regarding dingo management remains transparent and open to public scrutiny. Quarterly Newsletters are sent to all members updating research, information, projects and activities. There has been significant support from the public and local community, membership in the organisation continues to grow as people want to be more informed of the situation on Fraser Island.

SFID also engages with the community at events such as festivals, markets, displays and sausage sizzles. This provides an opportunity to inform the public of the issues facing the Island dingoes. An annual Dingo Day has also highlighted the plight of the Fraser Island dingo.

To gain detailed information on government management strategies it became imperative to obtain (RTI) Right to Information documents. This information has been released to the public and exposed many questionable and, at times, inhumane practices.

SFID is working with experts in dingo/wildlife management within Australia and overseas. The organisation aims to ensure ‘best practice’ is adhered to when dingo management strategies are released. Scientific research has established that the Fraser Island dingo has significant conservation value due to the fact that:
1. The dingo is an integral part of this unique environment and as apex predator, is vital in maintaining the health and balance of the Island’s fragile ecosystem.

2.The Fraser Island dingo is a genetically unique species because of its isolation from the mainland, therefore we have an obligation to ensure that the genetic integrity of the animals is preserved.

3. The Fraser Island dingo adds to the value of the Island as a major international tourist attraction, it is one of few places where visitors may get the chance to observe a dingo in its natural habitat.

SFID ‘s objective is to ensure that the Fraser Island dingo not only survives, but thrives on their Island home. A major goal was to have the (FIDMS) Fraser Island Dingo Management Strategy) peer reviewed and establish an Independent Advisory Committee to oversee the ethical and humane treatment of the dingo. Due to lobbying and promoting public awareness, the review was undertaken in 2013 and has brought about significant changes in management policy.

A 7 year business plan was presented to the government in order to establish a much needed Wildlife Care Centre on the Island.  Discussions have commenced with landowners, the State Government and Universities. This is an ongoing project and would not only benefit the dingo, but all wildlife on the Island.

SFID has established a working relationship with the State Government and has been invited to participate in Forum’s and Symposium’s presenting their views on management practices. Dialogue is an important step in negotiating a better outcome for the Fraser Island dingo.

Despite improved management in many areas, the mortality rate from vehicle strikes continues to rise, ear tagging continues and visitors interfering or attempting to interact with dingoes can still result in animals being destroyed..the campaign for a healthy and thriving population continues.

SFID continues to liaise with the scientific community and government in order to develop strategies to maintain a viable and sustainable dingo population. 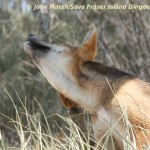 SFID Inc. IA37577.  CP 5365 ABN: 15 369 628 753. Member of the ACNC not for profit organisation, recognised by Federal Government as an Environmental Organisation with Tax Deductible Recipients status. 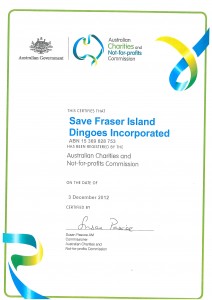 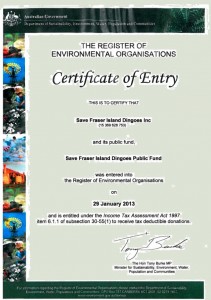